There are about 270,000 weapons permits issued in the state of Connecticut. If you’re interested in owning or carrying a weapon in the state of Connecticut, then you need to know and understand the laws.
Without this knowledge, you risk facing a weapons charge. This will result in you being arrested and going to jail. When this happens, you’ll need to contact a bail bonds service to bond out while you await trial.
Use this guide to understand the weapons laws in Connecticut.

When You Can Own a Weapon in Connecticut

You can avoid needing bail bonds in New London by following the letter of the law and obtaining an open carry or concealed carry permit.  Obtaining an eligibility certificate will enable you to purchase and transport your firearm but not carry.
If you want to carry your weapon, then you need to apply for a concealed carry or an open carry permit. Once you have a permit, you need to follow the local laws about where you can and cannot carry.

When You Can’t Own a Weapon

It’s illegal for someone to carry a switchblade, machine gun, brass knuckles, zip guns, or sawed-off shotguns in Connecticut, even with a handgun license. These are all considered “unlawful carry” offenses.

If you have prior criminal charges, then your ability to possess a weapon is limited. Individuals previously convicted of a felony or misdemeanor that involves domestic violence, the threat of physical force, or a deadly weapon cannot own a firearm.
You’re also barred from obtaining a Pistol Permit, Eligibility Certificate, or possession if you’re under the age of 21, subject to a Protective or Restraining Order, or convicted of a felony or one of the following misdemeanors.

If you’re caught possessing a weapon, and these conditions apply to you, then you’ll face new charges and need a bail bond serving New London.

Bail for Your Weapons Charge

The exact bail for your situation can vary greatly depending on the seriousness of your offense and your criminal history. The judge will set your bail amount, and then you’ll work with a New London bail bondsmen to bond out while you await trial.

Secure Bail for Your Weapons Charge 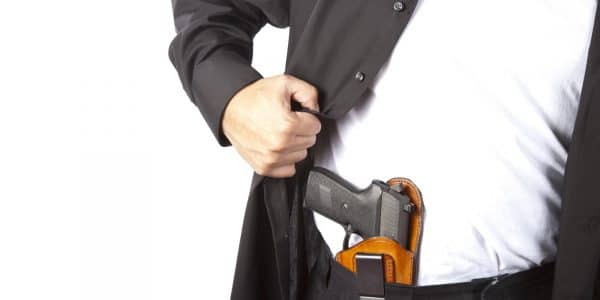